Pardons Canada Review – How to Remove an Assault Conviction

Home » Pardons Canada Review – How to Remove an Assault Conviction

Most assaults happen in an instant during a fit of anger at a very specific moment of time.  Next thing you know, the police are being called and arresting those involved in the fight. In many cases, the intention of the person calling the police is not to have them get arrested, but inevitably the police will make an arrest and the person will get fingerprinted and charged with assault.

Oftentimes, the assault charge is withdrawn, stayed, peace bond or discharged as it may have been a first offence and the person who called the police did not wish to pursue the criminal charges.  Regardless, the fingerprints need to be removed from the police and rcmp files so it cannot be seen by the public.

If there is a full conviction of assault, then the person will need to complete probation and then stay out of trouble for a certain period of time.  Once the eligibility date is close, you can apply for a pardon or record suspension which will remove the assault conviction so that it cannot be seen by the public when a criminal background check is conducted.

In this person’s case, she had an assault of a peace officer which she was convicted and had a one year probation.  Her eligibility date for obtaining the pardon or record suspension was five years after the end of probation.  As you can see in the letter, the person felt relieved once the pardon was granted as she can now be safe for all employment opportunities and travel to the US: 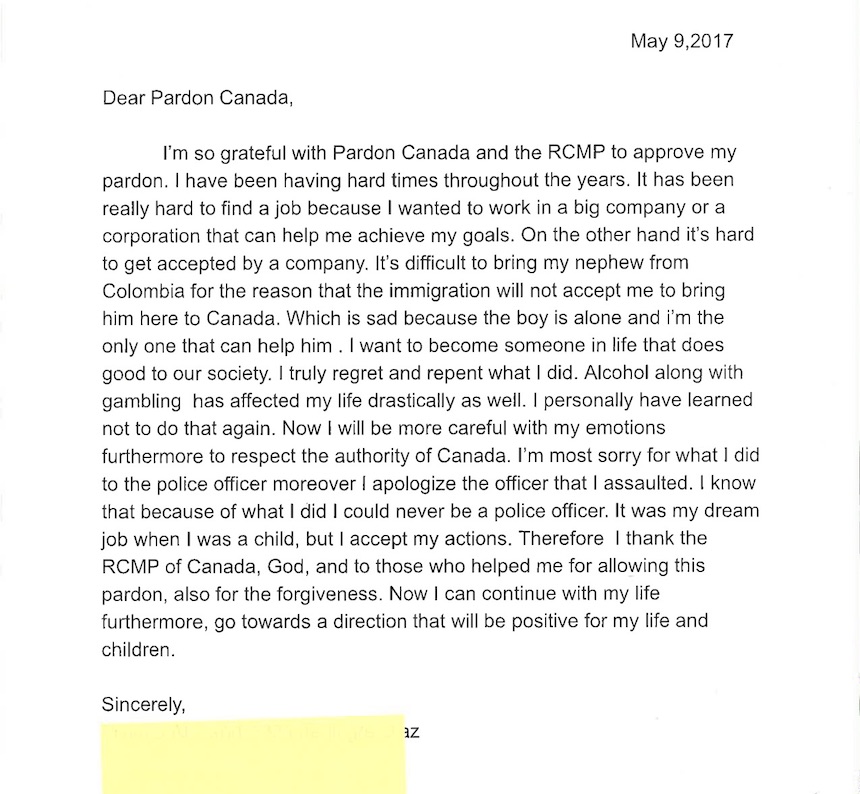 Pardons Canada: Why a 30 year old offence can prevent employment and volunteering.
October 26, 2022